You love mysms for Android phone, but you think it’s inconvenient to open the app for composing a reply? In this case it’s high time to get to know one of our latest feature improvements. 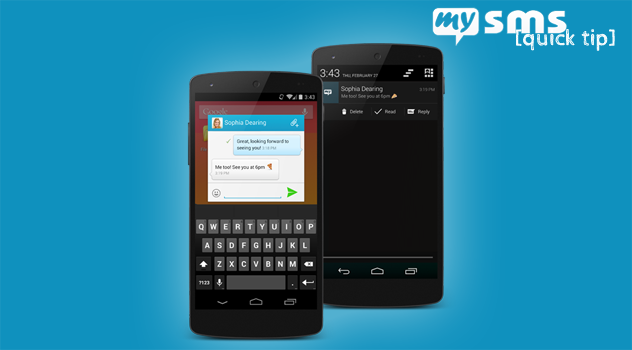 Reply via the popup or notification bar

Using the latest version of mysms, we provide you with two different quick reply options:

Probably you know our popup from one of our previous versions. Recently, we’ve changed the appearance of it. Now, when tapping into the input field, you can directly start to compose a reply. Instead of opening the whole message view, only the keyboard appears. Just enable the popup in the mysms settings and to use of this feature.

In case you’ve activated the option “Notifications” in the mysms settings on your Android phone, you receive a notification for incoming messages in the notification bar. In addition to open and read the message by tapping on it, you’ll find three options: Delete the message, mark it as read, or reply. By choosing “Reply”, the popup will directly compose a reply.

Don’t you think that this is much more convenient? How do you like these improvements?

Living in a mobile world

How much time do you spend with your mobile devices? Could you even survive a day without them? Rising figures of sold smartphones and tablets as well as declines in PC sales indicate that our world is becoming more and more mobile. But will our behavior really change to mobile usage only? Let’s have a look on some facts on this topic and on where the future of digital is heading. 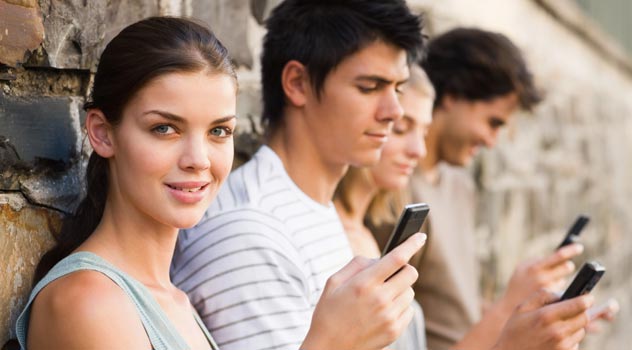 Smartphones and tablets are overtaking PCs

Mobile has always been much more than just technology. With the huge uptake of smartphones, technology and mobile experience grow closer together. The rise of smartphones and tablets clearly shows that there is a shift from desktop to mobile. While the sales of personal computers have a bearish tendency, the number of sold smartphones and tablets are booming. Especially smartphones are skyrocketing: The annual global sales increased from zero to 600 million within only a few years and in the US the smartphone penetration is already at 60 per cent. The tablet market is a few years behind, but still growing. Also wearables, such as smartwatches and smart glasses, gain increasing popularity.

Mobile devices are not just smaller or less powerful than computers – They are another way of thinking and a unique form of media that offer more interactivity. Altogether 3 billion people use the internet worldwide and more and more people already prefer to be online with mobile devices, rather than desktop PCs. Nearly 60 per cent of online devices are now smartphones or tablets. People like you and me have their mobile devices with them all the time and always on.

This development shows a change in consumer behavior. PCs are only semi-portable, mostly shared or often used at work. Nowadays, before upgrading or buying a new PC people are now rethinking the need of owning a PC and often decide not to purchase a new one. On the other hand, people use their mobile devices individually and mostly for talking, texting, social networking and visiting websites. Things like the address book and pictures are accessible for all apps, push notifications inform on news and the home screen icons make it easy to use and switch between apps – This makes mobile devices more interactive and social.

If we compare the different devices, it is interesting that each device has its own prime time. Computers are preferably used at midday, mobile phones in the afternoon and tablets in the evening. On average, people spend an hour a day with their smartphones and half an hour with their tablet each time they use it. Most important is the simultaneous use of multiple devices and screens. For example while watching TV, people are checking their emails, browse the internet, are active online on social media, searching for information or playing games. In this case the share of PCs is relatively small and overtaken by the boom of smartphones and tablets.

The most popular platforms for mobile devices are still iOS and Android, whereas Android currently is the most dominant one. About 80 per cent of smartphones and 60 per cent of tablets run on Android. However, iPad is a dominant player when it comes to web traffic. Moreover, people love apps. According to a study of Flurry Analytics, the use of apps increased by 115 per cent in 2013. Since 2009 the number of app downloads has risen to 50 billion for Android and 60 billion for iOS. Even though every app category has been showing growth within the last year, the categories messaging & social and utilities & productivity recorded an extraordinary growth. There are over 50 social messaging apps with over a million downloads on the Google Play Store (mysms belongs to this group, too :)). Even though this growth is mainly caused by the biggest messaging apps, it doesn’t mean that these apps enjoy a monopoly. Facebook for example has overtaken the social experience on desktops. But there is no service that has it overtaken on mobile yet. Each app is competing for attention against countless other apps. Users can easily look for their best option which meets their needs best. The criterion which often matters most is which apps or services friends use. It is valuable and convenient for people if they can combine all their needs and friends in one service. However, people still don’t really mind to switch between social apps on mobile.

It seems that our future will be dominated by mobile devices. So the question is: Should you be mobile only? Definitely not. The world is multi-screen, so it’s better to be mobile, too.

We’re very proud that the mysms community has spread around the entire world and that our service is used in over 180 countries so far. We’d love to provide our apps in as many languages as possible. As it is kind of impossible for us to cover all popular languages on our own, we’d appreciate your help! 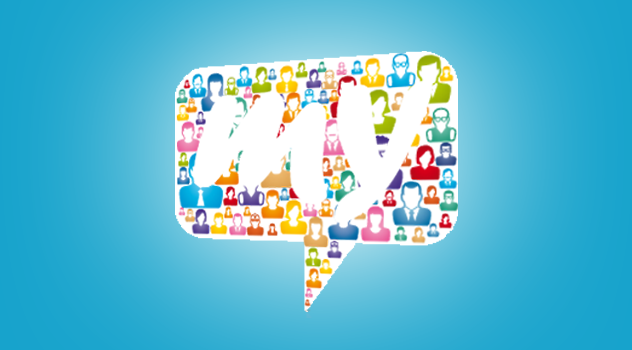 Be part of our community!

At this point we’d like to thank our existing translators. By their reliable translations, we made it to eleven different languages (English, German, French, Italian, Spanish, Danish, Dutch, Hungarian, Polish, Russian and Swedish).

Joining our community as a translator means that you participate in making our app more valuable for you and all other users who also speak your language. You will work with a professional translation tool, which facilitates the handling of translations for both sides. Your translation only concerns the mysms applications, not the mysms website or any other site.

There is no obligation to do translations on a regular basis, but regular translations lead to consistent texts and a better user experience. Of course it is work, if you start translating a new language. However, it is a real pity, when users invest their valuable time, but quit the translation before it has been completed. On the other hand, you can be proud, as soon as your language is completely translated and made available for all users with the next update J

Would you like to use mysms in your specific language? Become part of our community now! Go to our translation tool and create an account to start right away or contact us here to receive a guide for the tool.

[quick tip] Keep an overview of your MMS usage

With the support of Android 4.4 KitKat, we’ve implemented the feature to send regular MMS on any device. Do you want to know how many MMS you send within a month? Just have a look at the overview of your MMS usage in the mysms settings.

As mentioned in one of our previous quick tips, the menu “SMS & MMS usage” can be found under “Sending messages” in the mysms settings on your Android phone. To keep track of the amount of sent MMS, we added the overview of your MMS usage. This allows you to have both your sent SMS as well as MMS under control. In addition you can check how many messages you’ve sent directly from your phone and how many you’ve sent remotely (via your desktop, tablet, web).

How many messages do you send on average during one month? We would be very curious 🙂

[quick tip] (De-)activate toast message “Your text has been sent”

Toast messages serve as a confirmation that a specific action has been completed. Within the mysms Android phone app these notifications are available for sent messages both via your mobile carrier and via mysms friends. With today’s quick tip we’d like to show how to (de-)activate these messages. 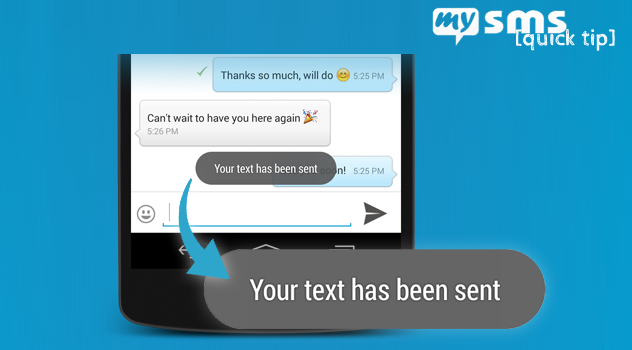 We provide you with a toast notification for messages to let you know that the sending process of a message has been completed. This notification appears in a grey box on the bottom of the app with the note “Your text has been sent”.

Basically, this message confirms that the message has been sent successfully. It can be useful when you send messages on your desktop or tablet or when you have a poor mobile signal. Anyway, some of you asked for an option to disable it. Especially when you text a lot it can be annoying, if you receive this toast message while composing another reply or new message (as it overlays the keyboard). That’s why we’ve implemented a new setting. Under “Expert settings” in the mysms Android phone app, you’ll find an option called “Show toast message”. If you disable it, the toast message won’t be displayed any longer when sending a message.

We are always trying to improve our app by including your suggestions. Therefore, we’d like to thank our community for that feedback!