With mysms we aim to make your day-to-day communication easy and fast, no matter which device you use. For Android phone we recently launched the following five different swiping actions that will help you to perform the most used mysms features a lot quicker than before.

1) Swipe to the right

If you swipe to the right side on a conversation in the overview, you will notice the option to delete a thread. This can come in very handy if you want to delete conversations fast. No worries, you have to press on the icon before we finally delete your conversation. Like this you won’t erase a conversation by accident. 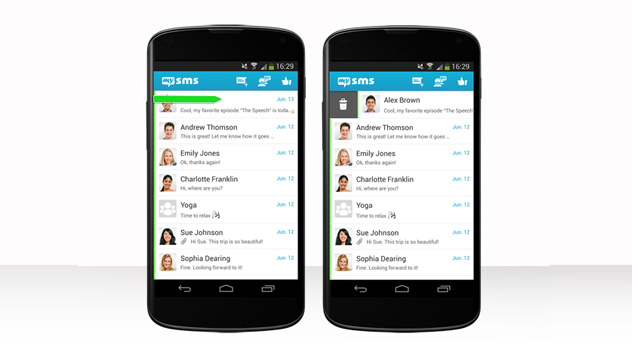 Swipe right to delete a message

2) Swipe to the left

You are texting with mysms and decide to call one of your friends. Swipe left in the conversation overview and you can start a call without switching to your phone app. 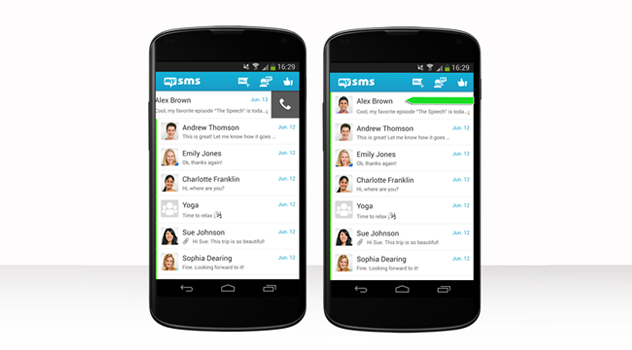 Swipe left to make a call

3) Swipe left on a group conversation

Are you a heavy group user? Sometimes it’s getting difficult to remember who of your friends belong to a particular group. By swiping to the left, all members of a group will pop up and you will be able to add new contacts to the group. 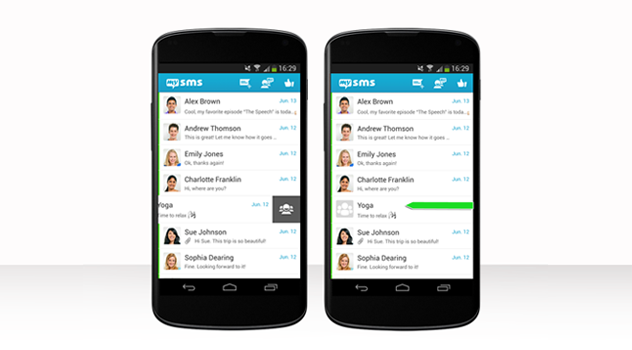 If you prefer to keep your mysms inbox slim instead of saving all your messages, this might be the perfect feature for you. Simply swipe up to delete the latest message. This works in individual conversations as well as in the pop up. You can activate this feature in our newly introduced expert settings. 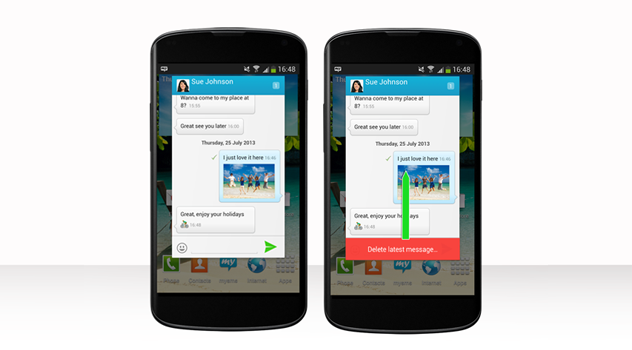 Swipe up to delete the latest text

The quickest way to start a new text is to pull down in the conversation overview. You can immediately enter your contact and start writing your text. 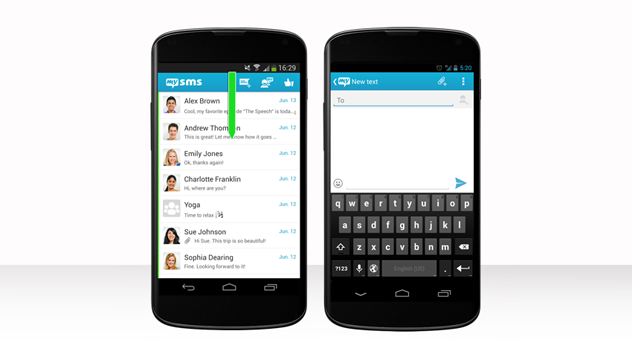 Pull down to enter a new text

In the next updates we will include an option to de-/activate all swipe gestures in the mysms settings. Are you missing another swipe action that we should include in the releases? We’d love to get your opinion!

Get notified when your mysms friend is typing a message

Ever wanted to know if the recipient of your message is already composing a reply? This is now possible with our latest integrated typing notification. Last week we’ve released this feature for Android tablet and iPad and now we’re expanding typing notifications also to Android phone, iPhone and the web. 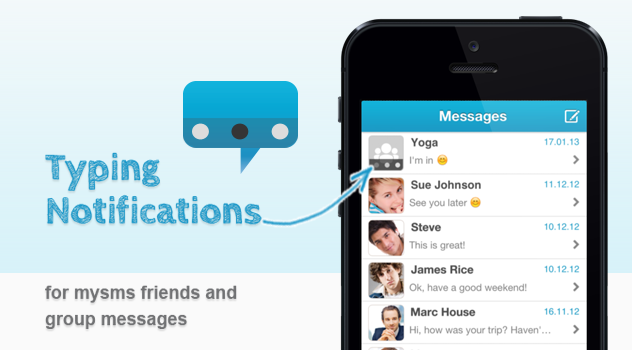 How can I see that my contact is typing?

If you have enabled contact pics you’ll see three animated dots at the bottom of your photo, while the person on the other end is typing. It does matter if you are in the message overview or directly in a conversation, you will recognize that your contact is composing a message.

Do I get typing notifications for all my messages?

Typing notifications are only shown for mysms friends and they are displayed for single and group messages. For texts via your mobile carrier this feature is not available.

We are excited to offer you this feature and we hope it makes your mysms experience a lot richer. If you haven’t done so, get the update now and let us know if you like it!

All about text messaging patterns

Posted in messaging by afeiner

When my 18 year old cousin moaned the other day about her $200 phone bill, I asked her how many texts she sent last month. She said she was texting like usual and did not send that many messages. Turned out she had sent over 3000 (!) texts that month, on average 100 texts a day. 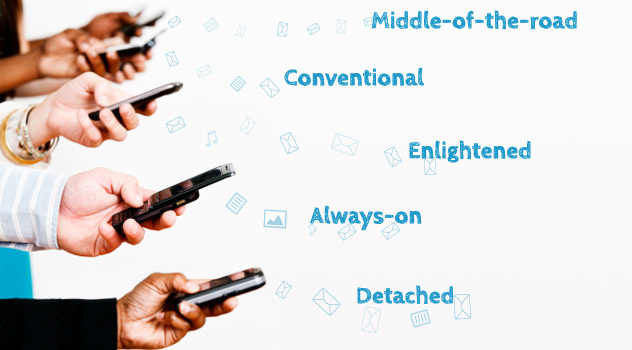 Texting is the most used way to stay in touch with our family and friends. But not everybody is a heavy texter like my cousin. Each of us uses texting in a different way, depending on our individual needs and wants. Lately I have discovered a report from Ofcom that was published a few weeks ago. According to them, there are five different types of people who text:

Above all, there is the user group who communicates a lot; we call them ‘always-on’ communicators. This group cannot live without their mobile device. They often own a smartphone and use their mobile phone primarily to text and call friends and family. As the name suggests, ‘always on’ communicators are open to use other communication channels like social media to share contents with a wider public and newer forms of communication such as VoIP. This segment is the youngest user group with a high proportion of people still in education.

This group of people is still young (most of them were under 35), but more likely to work. They like to stay on top of new technologies and are the ones that are often referred to as “techies”, “geeks” or also “early adopters”. They use texting and mobile calls more often than the other groups to contact friends and family, but also like to use email and social media for communication. However, if you compare this segment to the ‘always-on’ group, they are a lot more reluctant about sharing information online.

If you haven’t felt related to one of the groups above, maybe you are more in the ‘middle-of-the-road’. This group likes to use a range of methods for communicating with others including traditional and newer forms of communication. Their favorite ways to keep in touch with others are text messaging, mobile calls and post. In general, they “let others try out new services first before giving them a go themselves”.

This group is the oldest segment and most likely to be already retired. As you can imagine, conventional communicators prefer to use traditional communication methods such as landlines and are the least open to new technologies and new communication forms. They tend to send a card or a present in the post for special occasions (like birthdays…).

The final group consists of those of us who don’t communicate a lot. The most preferred way of contacting friends and family is text messaging, but communication is not that important to this group in general. They hardly use mobile or landline calls, but are more open to quick text-based forms of communication like micro-blogging on Twitter. Compared to the other groups, detached communicators are often men across a wide range of ages.

Communicators of all groups claimed that they now communicate differently than only two years ago. Especially communication services that depend on internet and mobile phones have seen a large increase. The biggest winners are email and texting (17% of all adults now use them more), but also social networks are used more frequently (20% increase for ‘always-on’ communicators). The biggest loser is by far post (30% overall decrease), but also landline calls have started to decline. Ofcom believes that these trends will continue in the upcoming years. Receiving a post card might become a very special thing in a few years’ time.

What do you think of these trends in communication services and to which of the five communication groups would you classify yourself? Let us know in the comments.

mysms for Windows Phone is Here!

Here at mysms we made a big step towards platform-independence last weekend, when we released mysms for Windows Phone. Our messaging app is now available for 88 % of all smartphones. In other words, the amount of your mysms friends is growing continuously. That’s brilliant news, right?

Until now mysms has been available for iOS and Android smartphones only. These days are over! With the rise of Windows Phone OS we decided to broaden our portfolio. So here it is, our mysms app for Windows Phone: 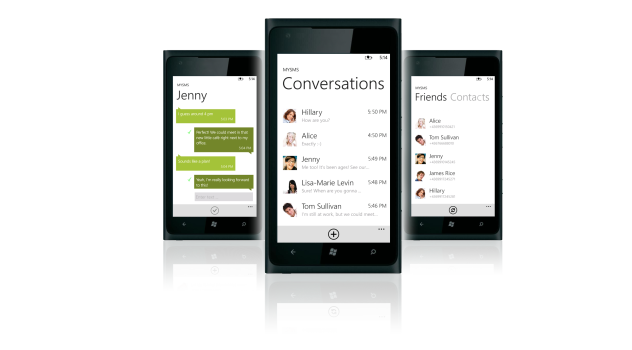 You can find our mysms Windows Phone app at Windows’ Marketplace and download it for free. Invite your friends, no matter if they own an iPhone, Android or Windows Phone, so you can send them messages free of charge.

Also, Windows Phone users can now use our Android Tablet app and web apps. Our web app portfolio includes mysms for Windows (desktop), Mac, Facebook, Chrome and any other web browser. Using mysms on a personal computer allows you to enter your messages comfortably on your computer keyboard. Believe me, you will love this! 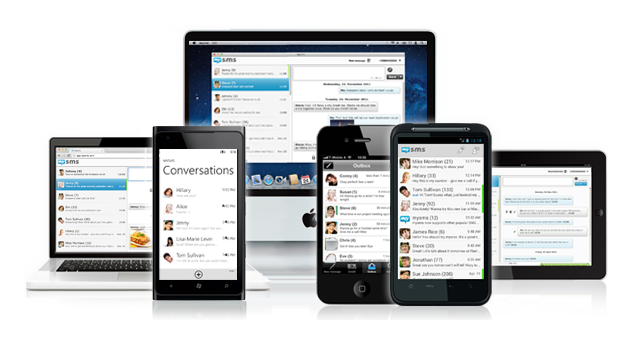 When designing mysms for Windows Phone, we stuck to Windows’ design elements. mysms adapts colors to your current theme and uses buttons you’re familiar with. Consequently, it’s intuitive and easy to use as well as it’s a feast for the eyes 😉

As mysms for Windows Phone is still in beta, we’d love to hear what you think about our newest mysms family member. Let us know in the comments.

Please note: We decided to stop the development of our Windows Phone app in October 2013. This has several reasons, which you can read in this blog post. 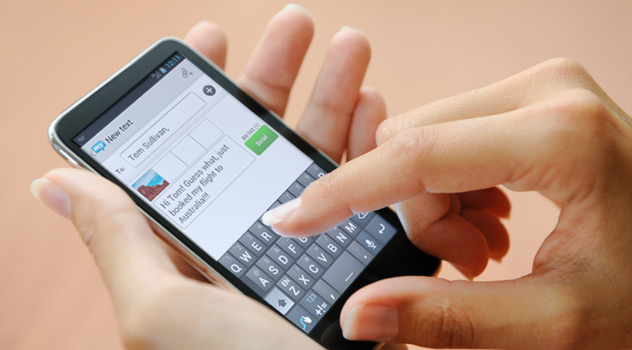 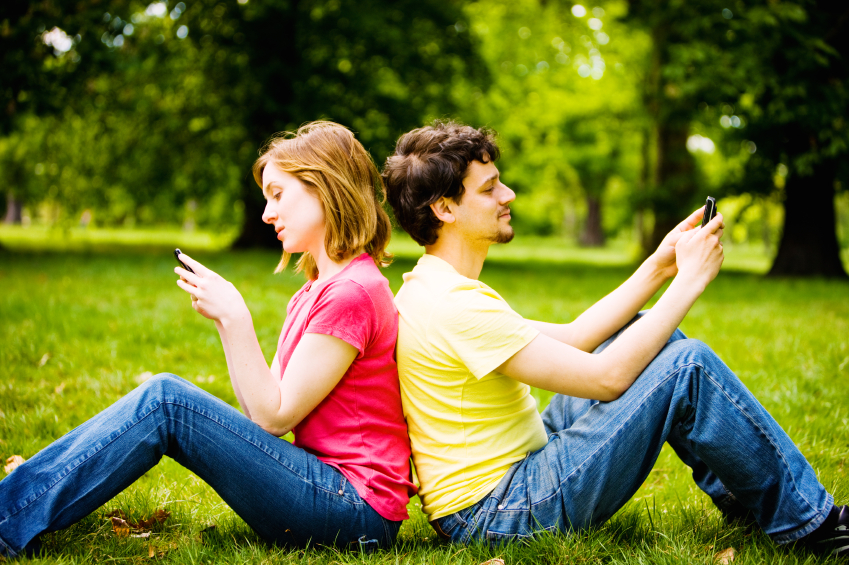 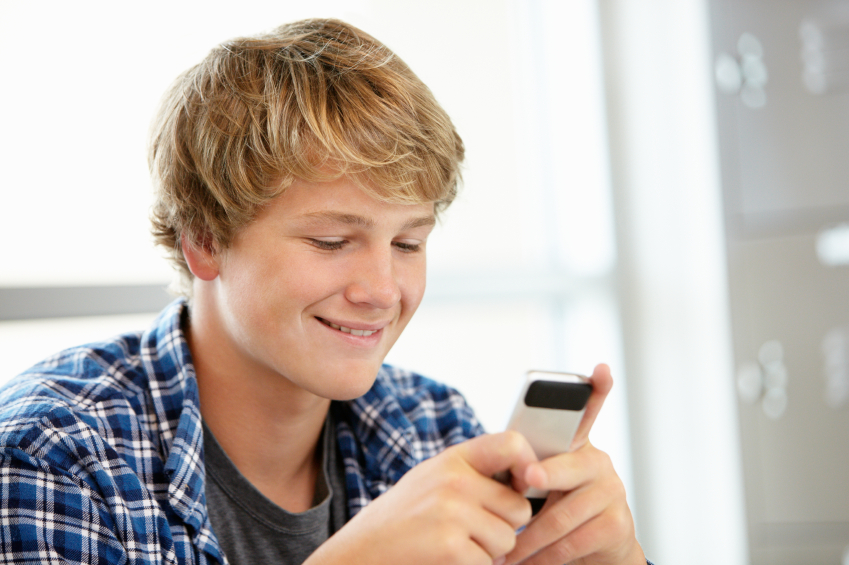