What is NFC and Why Should I Care?

NFC is short for Near Field Communication, which is a technology that enables two communicators to exchange information wirelessly over a short distance. This might sound very similar to bluetooth, however there’s a crucial difference. While bluetooth works great between two devices (e.g. two smartphones), NFC doesn’t necessarily need two active devices. NFC can do more! It also supports the communication between one device and a passive tag.

You might have been using NFC already and are not aware of it. NFC technologies have arrived in our everyday life and are used, for example, in tickets for public means of transport and ski lifts and also as keys. 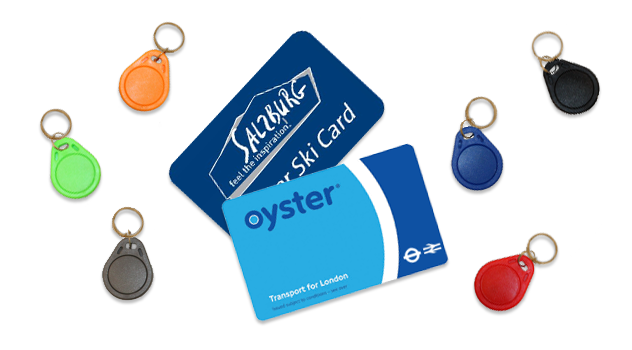 What is an NFC Tag and What Can I Do With It?

An NFC tag is tiny, low weight and super thin. What makes it really interesting is that it works without any battery; its power comes from the RF field of the initiating device (which is, for example, your smartphone). The most hyped use of NFC is contactless pay. However, there are other (more fun!) ways to make use of NFC tags:

Integrating an NFC tag in a business card is simply awesome. You just tap the card with your smartphone and automatically save the contact details in your phone’s contacts.

An NFC tag can be a part of a poster. By holding your smartphone close to the poster you get a gift coupon (best case), are linked to a website or Facebook page, can check in on Foursquare, or anything else companies might think you could find interesting – hopefully no commercials (worst case).

It’s never been as easy to understand art! You just – guess what – touch the NFC chip (probably) next to a piece of art and it gives you all the information the museum provides.

Using NFC you can read hints during a paper chase or while geocaching. If you install an NFC application, you can even change the information saved on a tag, which can be great fun 😉

NFC at the Museum of London and on a poster

How can I use NFC?

In order to be able to use NFC you need: