Mobile Phones Now and Then – a Little History Lesson

The mobile phone has accompanied us for about 30 years now. Within the last decades it has evolved from a means of simple communication to a personal assistant who facilitates our everyday life. Today, we can’t imagine a world without our beloved cell phones, let alone mobile internet, apps, built-in cameras and mp3-players.

Just a couple of days ago my 7-year-old nephew asked me: “What did you do with your iPhone before there was internet?” That’s when I decided to go back in time and tell a little history about the evolution of mobile phones. So read along, whether you are 7 and want to know where the iPhone comes from or you are 25+ and can still remember a time without apps and all the bells and whistles. 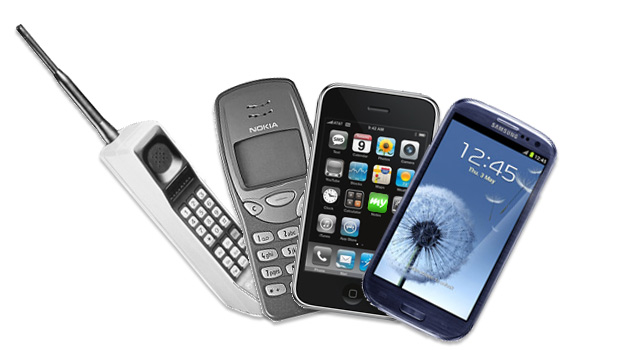 Mobile phones now and then

The early 1980s brought us the first generation of mobile phones. Believe it or not, back then the only purpose of the mobile phone was to make phone calls. This is how a cell phone looked some 30 years ago:

Not very surprising, this phone was also called “The Brick”. Nowadays it may seem as if Motorola didn’t have any appreciation for design, however, the brick was considered revolutionary back then.

Some changes are pretty obvious –size and weight shrunk enormously, it got a real display, fewer keys and battery lives improved. Also, mobile phones got some cutting-edge features, like an internal antenna, mobile games (Snake!) and SMS messaging. With its killer features the Nokia 3210 became one of the most popular mobile phones in history.

The trend of making cell phones tinier and tinier lasted until the mid 2000s. Holding a teeny Sony Ericsson Z525a in 2006 I was making fun of huge phones, not knowing trend was about to teach me a lesson. A major event in the history of mobile phones lead to a fundamental change in size and look of devices: the launch of the first iPhone in 2007.

The release of the iPhone 2G was the start of the smartphone revolution. Apart from making phone calls and sending text messages, smartphones seemed to have nothing in common with mobile phones from the 1990s. The mobile phone of the late 2000s was a mini-computer, with which you could surf the internet and make use of apps. Furthermore it replaced your camera, your calendar, your mp3-player and your remote control. Suddenly all the other handset manufacturers started to build smartphones and the devices got bigger and bigger.

Today it gets harder and harder to tell cell phones and tablet computers apart. The newest member of the smartphone family is the Samsung Galaxy S III, announced on May 3rd in London.

Obviously, over the years design and usability have become very important to the mobile industry. Technical improvements are impressive. Pictures you take with your new Samsung Galaxy S III are of a higher quality than those you took with your Canon Ixus a few years ago. Also, the performance of today’s mobile phones is stronger than those of computers we used a decade ago. The only real disadvantage that’s involved is the poor battery life. So there’s still room for improvement.

Anyway, it’s for sure that the evolution of mobile phones has turned out pretty great so far. Our smartphones are great assistants, who we can even talk to now. So all that’s left to say is: A world without a mobile phone is possible, but pointless 😉