Posted in mobile news by mysms

Congratulations! Text messaging celebrates its 20th birthday today. Hard to believe that it’s been already 20 years, when it was possible for the first time to send 160 characters via a mobile phone. Can you imagine living without text messaging? In this case you wouldn’t be able to send short updates when coming too late or arrange meetings without making a phone call. Text messaging makes us more flexible in our day-to-day communication. But how did it all start and what will be the role of SMS messaging in the future? 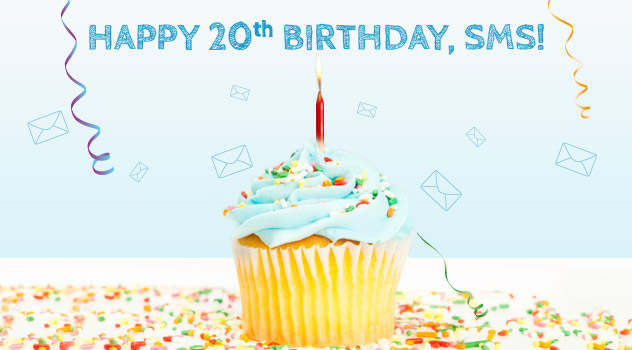 The origins reach back to 1984, when a Finish engineer started a discussion about the idea of a messaging service at a mobile telecom conference in Copenhagen. However, the first text message was sent on 3rd December 1992 by the Vodafone technician Neil Papworth. “Merry Christmas” were the words he sent via the new transmission technology Short Message Service (SMS). These two words were the foundation for a service which people can’t imagine living without nowadays.

Texts or short messages (SMS) are a way of communication to exchange messages via mobile phones or from a computer to mobile phones. The word “short” stands for the maximum of 160 characters that could be used at its start. At the beginning text messaging was free of charge and mainly used to inform subscribers about waiting voicemails. As you can see on the chart, it took a while until texting became the most popular form of communication. From the first sent message in 1992 SMS traffic increased steadily up to over 8 trillion texts in 2012. Nowadays, every single user of a mobile phone is able to send and receive texts. And with the emerging trend towards using smartphones instead of simple feature phones (and the associated constant internet connection), new technologies like instant and OTT messages are becoming increasingly important. Just like with mysms friends, it is possible to transfer messages worldwide for free via data connection. In addition some implementations for the keyboard, like T9 or Swype have been relieved the handling of text messaging and made it more convenient over time. Furthermore, you are able to send even more than 160 characters and you could send them via any device nowadays.

When we started with mysms our goal was to bring the advantages of both worlds (SMS and instant messaging) to one single product. By using our app you can send not only texts via your mobile carrier, but also instant and multimedia messages (mysms friends messages) to other mysms users via data connection. In addition, times where you have to write messages on a small keyboard on your phone are also enhanced by the possibility to write texts and messages on your computer or tablet as well.

Despite the fast moving world of technology, texting is still the world’s most used form of digital communication, over 8 trillion texts are sent every year and it still connects more people than every other messaging service e.g. Facebook or Twitter. Moreover, text messaging has been proven to be as addictive as smoking cigarettes. We believe texting will continue to be popular in the future and will be endorsed by instant and OTT messages.

We are looking forward to congratulate the SMS to its 30th Birthday.